The praise for CoolSculpting just keeps coming! Called “non-invasive liposuction” in Allure Magazine a few months back, CBS This Morning recently chimed in about the non-surgical fat reduction technology, available at Skin Care Institute in Tulsa, dubbing it a “surgery free alternative 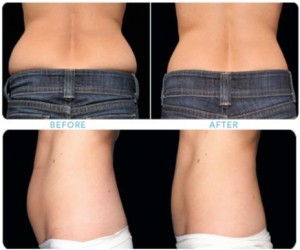 to liposuction” when used on the right patient. CBS also called CoolSculpting one of the rare examples of a non-surgical fat reduction treatment that lives up to the hype. Here at Skin Care Institute, we certainly agree with CBS.

FDA-cleared, CoolSculpting is an extremely safe, effective way to reduce bumps and bulges of unwanted fat that persist despite a healthy diet and exercise. In fact, this year alone, over 425,000 CoolSculpting treatments have been performed in the United States and over 1 million non-invasive procedures have been performed since cryolipolysis, the science behind CoolSculpting, was invented in the early 1980’s. Is the technology so popular for a good reason? We certainly think so.

Just one CoolSculpting treatment for the abs, flanks (love handles), inner thigh or outer thigh (saddle bags) can reduce unwanted fat cells in the area treated by 20-25%, and all without any surgery or downtime.

Our comfortable treatments can take as little as one hour, easily performed on a lunch hour or while the kids are at school. CoolSculpting works by freezing fat cells to the point of elimination, yielding gradual yet significant results in the weeks and months following your treatment.

Curious what Tulsa CoolSculpting can do for you? Just check out these CoolSculpting before and after photos on our website. If you’re bothered by excess fat but don’t want to undergo invasive liposuction surgery, schedule your free consultation today. Call 918-948-9639 or email info@3.23.104.40, today.

*Results are not guaranteed and may vary from person to person. Downtime is subjective to individual pain tolerance. Before and after photos are not to be taken as guarantees for expected results.

Proudly created by the team at Acara Partners